Gingivitis, the Scary Word that No One Knows the Meaning of 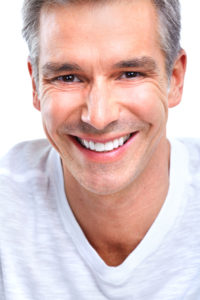 We don’t even realize it, but we’re continually under siege from advertising. The only way most of us have ever heard the word “gingivitis” is from advertising lore. Listerine has long used the phrase, “Listerine fights the germs that cause gingivitis.” And they’ve left it at that. No explanation. No further illumination.

So, everyone has heard the word gingivitis. But what is it? Dr. Walk and Dr. Bamel want our patients to be knowledgeable about their dental health, so here’s a little primer on gingivitis.

Gingivitis, beyond its scary name

Picture yourself as Don Draper, the ad man from Mad Men. OK, maybe you don’t need to drink a bottle of bourbon every day or two! Anyway, gingivitis is an ad man’s dream. The word sounds scary. But its actual meaning is fairly benign — the term gingivitis simply means gum inflammation.

Plaque is the main irritant of the gums. Plaque is the film that forms on the teeth throughout the day consisting of bacteria, bacterial waste products, food residue, and saliva. When you brush and floss you remove the plaque. Then it starts to rebuild, only to be removed again when you brush. But if you neglect your oral hygiene the plaque can develop beneath the gumline, where it is very irritating to your gums. If allowed to stay there, the plaque hardens into tartar, causing more persistent irritation. And this is where things get dicey. Because while the term “irritation” sounds innocent enough, if this irritation is allowed to continue and progress, it leads to gum disease, clinically known as periodontitis. And periodontitis is not where you want to go with your gums.

What are signs of gingivitis?

Now that you’re an expert in all things gingivitis, how do you know when you have it? Gum irritation is easy to spot. Your gums should be pink all over, with a bag of cotton candy at Fenway. Any bright red patches show irritation. Your gums should also lie flat against the teeth; inflamed gums tend to recede and pull away from the teeth. Your gums will also be prone to bleeding, and this shouldn’t normally happen if you’re using a soft toothbrush. Bleeding is a sign of inflammation. And finally, as in the commercials, your breath will reek. The commercials get this part right — your bad breath is caused by bacteria that is being left to its own devices by your poor oral hygiene.

Once your gums are irritated and heading toward gum disease, we can intervene with a few options to get your gums back headed in the right direction.

OK, this is a fancy term for your twice-yearly professional cleaning. Why twice a year? That is the time it takes to start forming tartar and other issues that lead to decay. During these cleanings and checkups, not only will those problem areas receive a thorough cleaning, but we will also point them out to you for more attentive care at home.

If you have a fair amount of tartar built up under your gumline, we will scrape it off with dental tools. This is called scaling. Why? Because “scraping with dental tools” sounds pedestrian. Depending on how much we have to do, we may give you a local anesthesia.

In root planing, any tiny grooves or pits are removed from the tooth roots to make it easier for the gums to adhere and stop receding. This is done in multiple appointments with local anesthesia.

Look, now you’re an expert in gingivitis! Yea! And you didn’t even have to do an internship at some Madison Avenue ad agency to get there! Is it time for your next checkup? Call the team at Cosmetic Dentistry Center to make your appointment.